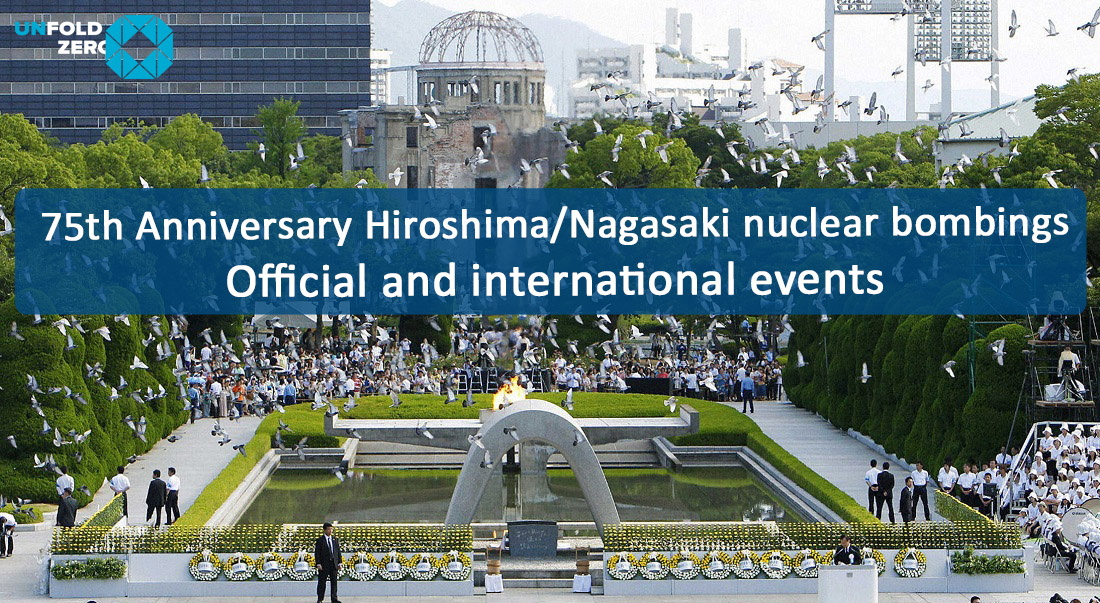 Dear Peter,2020 marks the 75th anniversary of the detonation of nuclear bombs during World War II in Hiroshima (August 6) and Nagasaki (August 9). There will be official commemoration ceremonies in Hiroshima and Nagasaki organised by these cities, was well as events organised by civil society around the world, many of which are online due to the pandemic.

Abolition 2000, the global civil society network to eliminate nuclear weapons, has compiled a calendar of international and national commemoration events, including key events on Hiroshima Day, key events on Nagasaki Day, plus links to calendars of local events in Germany, the United Kingdom and the USA.

Watch on livestream, August 6 and August 9

The official Hiroshima commemoration ceremony will take place on Thursday August 6 from 8:00am-8:50am Japan time. Click here for information on how to watch the ceremony on livestream. The UN Secretary-General is expected to either attend the event or provide a video message if pandemic conditions prevent his attendance. For more information see Hiroshima Peace Memorial Ceremony

A commemoration event at the Nagasaki Peace Park.

On Sunday August 9, BBC will air The Black Sun: marking 75 years since the first atomic bomb, a second 90 minute program of music, readings and poems. Iain Glenn and Kae Alexander (who was born in Kobe in Japan) will read work by Japanese writers, including Hiroshima survivors Nakamura On and Sadako Kurihara; and poetry by Allen Ginsberg, John Donne, Ukrainian poet and Chernobyl survivor Liubov Sirota and the British writer Susan Wicks. This will be supplemented by music from shakuhachi player Toshimitsu Ishikawa, koto player Kimio Eto and electronic pioneer Isao Tomita.

Click here for information on Peace Wave events in Belgium, Canada, Denmark, Germany, India, Italy, Japan, Nepal, Netherlands, New Zealand, Norway, Philippines, Spain, UK and USA. You can join the peace wave by undertaking your own small, creative, social media action from home or interesting location, or joining an action in your community, and then registering the action with the Peace Wave Action Committee.

The Peace Wave action is organised by Gensuikyo, the Japan Council Against Atomic and Hydrogen Bombs, which is also organising a World Conference against A and H Bombs.

An online global video presentation which will be shown five times over three days (August 6, August 8 and August 9) to commemorate the 75th Anniversary of the Hiroshima and Nagasaki Atomic bombings and introduce the Hiroshima/Nagasaki Accord.

The Accord has been jointly issued by four of the world’s largest interfaith/intercultural organizations, Charter for Compassion, Religions for Peace, Parliament of the World’s Religionsand United Religions Initiative.

The event will inlcude presentation of the inaugural Voices Youth Award, a prestigious new prize established by Voices for a World Free of Nuclear Weapons to honour youth actions for a nuclear-weapons-free world.

Youth Peace Week is from August 3rd to 9th, 2020. Originally established in New Zealand as Schools Peace Week with the support of the New Zealand government, the week has spread to other countries. It was changed into Youth Peace Week due to the fact that many schools in the northern hemipshere take holidays during August.

The Peace Foundation of New Zealand organises the week and produces resource materials for schools and youth for the week. The theme for 2020 is Celebrating Diversity. Click here for more information. Click here for the Youth Peace Week 2020 Toolkit.

August 12 is the UN International Day for Youth. Established in 1999, the objectives of the day are to bring youth issues to the attention of the international community and celebrate the potential of youth as partners in today’s global society. The theme for 2020 is Youth Engagement for Global Action.

The Abolition 2000 Youth Network encourages those observing the International Youth Day to consider the importance of peace, disarmament (including nuclear disarmament) and sustainable development for youth, especially in light of the COVID-19 pandemic. One of the suggested actions for youth is to contribute a short video message to the Youth voices and actions on climate, peace and nuclear disarmament.

A two day event on August 6 and August 9 organised by #stillhere, HiroshimaNagasaki 75,a group of USA organizations and individuals working together to mark the anniversaries of the nuclear attacks on Hiroshima and Nagasaki and the Trinity nuclear test.

#stillhere highlights the voices of those affected by nuclear weapons: the hibakusha, downwind communities, nuclear workers, uranium workers, military personnel, and their families who were exposed to harmful and sometimes deadly levels of ionizing radiation and other toxins. #stillhere presses US leaders to take the actions necessary to ensure nuclear weapons are never used again and to negotiate in good faith the global elimination of these most devastating weapons of mass destruction.