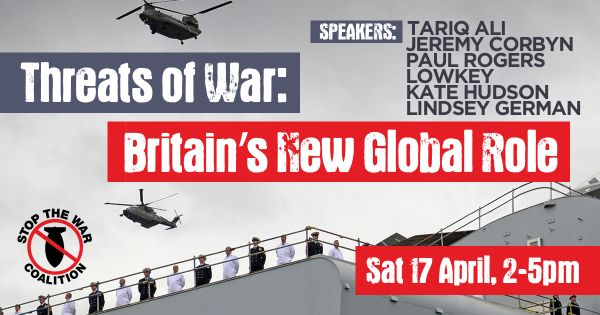 There’s just over a week until our Threats of War conference where we’ll be joined by a great range of guests to discuss the perilous future of Britain’s war machine. With the government recently setting out its expansive foreign policy objectives in the Integrated Security Review we know that more war is on the cards.

Next month, the HMS Queen Elizabeth aircraft carrier will embark on its first operational deployment to the Pacific equipped with a number of US Marine Corps fighter jets. This is a sign of things to come – Britain carrying the US’s warmongering ambitions at huge expense to the taxpayer.

Meanwhile, Britain continues to bomb Iraq 18 years on from the beginning of that catastrophe and the UK enabled starvation of Yemen worsens every day.

We’ll be tackling all this and what we can do about it next Saturday with Jeremy Corbyn, Lowkey, Tariq Ali, Lindsey German, Kate Hudson, Professor Paul Rogers and more. Sign up below.

After 20 years of war Britain is to finally retreat from Afghanistan as part of the broader US plan to withdraw its troops by Sept 11. The war and occupation has been a complete and utter failure.

They have failed to bring peace to Afghanistan, failed to topple the Taliban, failed to reduce terrorism and failed in its duplicitous objective to liberate Afghan women.

The announcement is welcome but we need to be clear that the Western war machine is merely redirecting its artillery.

This Saturday we’re holding an important conference to analyse this reorientation and what it means for the world. Make sure you join us.

Increasingly, the primary target is China. The recent Integrated Defence Review stated that China poses a “systemic challenge to our security, prosperity and values”.

Such inflammatory rhetoric is matched by Western military measures currently being undertaken in order to stoke tensions.

Earlier this week, a US spy plane conducted a surveillance mission where the Taiwan Strait meets the South China Sea. This triggered a three-way standoff involving the Chinese and Taiwanese air forces in which the latter placed its air defence missiles on standby. These kind of flare-ups are becoming routine.

Baroness Goldie announced in parliament recently that ”in support of the strategic tilt toward the Indo-Pacific…the Ministry of Defence plans to establish a persistent maritime presence” in the region. By adopting this approach, Britain is helping to stoke tensions with China.

One of Saturday’s breakout sessions will focus specifically on this issue. If you want to know more, register below.

RSVP for the ‘Threats of War’ conference

The Integrated Defence Review actually cited Russia as the most acute threat to Britain’s security and provocations around Ukraine are heightening tensions there too.

Last year, Boris Johnson, described the UK as “Ukraine’s most fervent supporter” whilst signing a Strategic Partnership Agreement with its President.

With US warships currently en route to the Black Sea and Russia sending thousands of troops to the Ukraine border observers are talking of a ‘crisis point’.

As NATO continues to issue veiled threats to Russia this is a situation which has the possibility to result in a hot war between major powers to the detriment of us all.

Make sure you join us the Threats of War conference to discuss what is driving this new round of provocations and how they can be stopped.