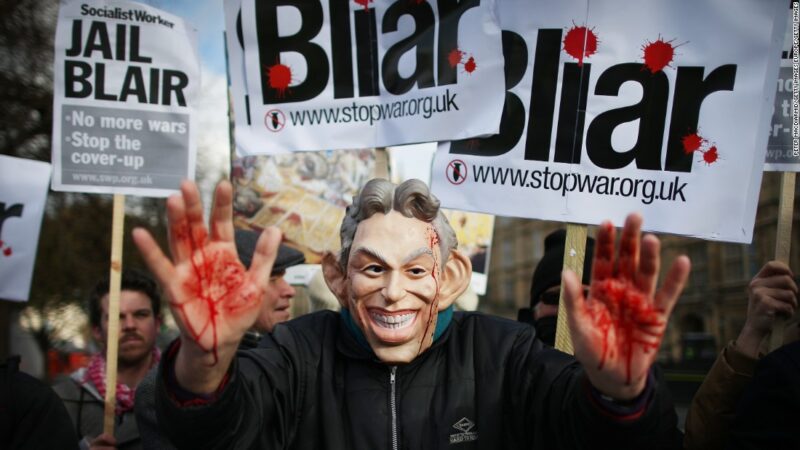 Over 700,000 have now signed the petition against Tony Blair’s knighthood, which was announced on New Year’s Eve. Opinion polls show only 3% of the public strongly support the award, while 63% oppose the decision. By any stretch of the imagination this was not a popular start to 2022.

In 2003 we held the largest protest ever in the UK against Blair’s war in Iraq, we campaigned twenty years ago over the revenge war launched on Afghanistan. In 2021 it became clearer than ever how right those who took to the streets to oppose Blair’s wars were. But now, with the blood of millions on his hands, Tony Blair is to be awarded the highest of all accolades, the Order of the Garter.

Stop the War will be protesting the granting of this award. Join us for the annual Garter Day procession in Windsor on 13 June.

Blair should be facing a war crimes trial. But instead on 13 June he will be joining the Queen at Windsor Castle, dressed in a velvet robe, glistening insignia and a plumed hat, taking part in a procession to St. George’s Chapel as part of the grand royal ceremony.

As Lindsey German said this is nothing less than a “kick in the teeth” for Iraqi’s and Afghans, for those who have lost loved ones, and for the millions of refugees who are the victims of these wars. 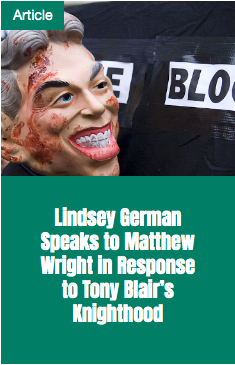 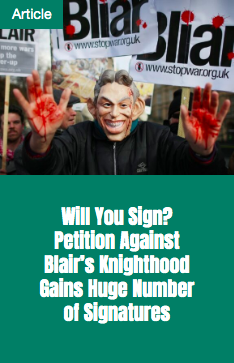 Tony Blair should be heading to The Hague, instead on 13 June he will be heading to the castle at Windsor where he will be knighted by the Queen. Stop the War will be protesting the granting of this award and we want you to join us.

Yes, I’ll be there