according to Kyodo News in Japan.

For decades, the fallout from the atomic bomb blasts was well known as ‘black rain’ throughout Japan. However, the Japanese government constructed arbitrary geographical borders designed to limit which Japanese citizens might be eligible for compensation.

According to Kyodo News:

“The High Court said radioactive rain fell in a wider area beyond the designated zone and the plaintiffs are Hibakusha because they are likely to have suffered health damage caused by their exposure to radiation. The ruling accepted the plaintiffs’ claim that there was also a possibility of internal radiation exposure due to the ingestion of contaminated food and well water…”

Worldwide, it is essential that the Courts have finally identified these Japanese citizens as radiation victims. Kyodo News wrote: “Upholding a lower court decision last year, the Hiroshima High Court ruled in favor of the plaintiffs, saying they should receive the same benefits as those provided for atomic bomb survivors who were in the zone where the state has recognized black rain fell.”

From Fairewinds’ standpoint, there is much more to this ruling than this win for this group of bomb survivors. Since our inception a decade ago, Fairewinds’ mantra has been Radiation Knows No Borders. Data we, our colleagues and community-volunteer citizen-scientists have collected from around the world was published in peer-reviewed journal articles proving that radioactive microscopic particles generated from mining uranium ore, reprocessing atomic fuel, bomb tests, and disastrous meltdowns travel well beyond the arbitrary boundaries and demarcation lines that governments establish to limit their liability and to maintain control over others. 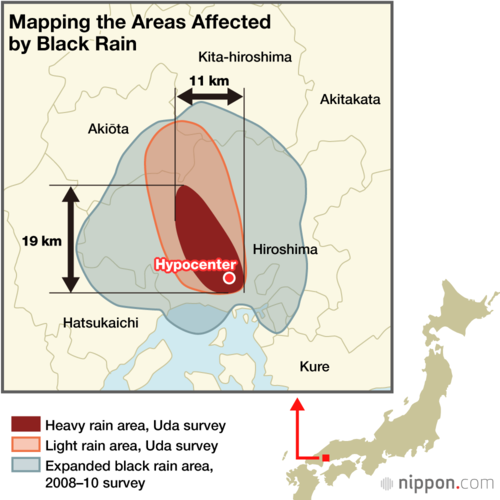 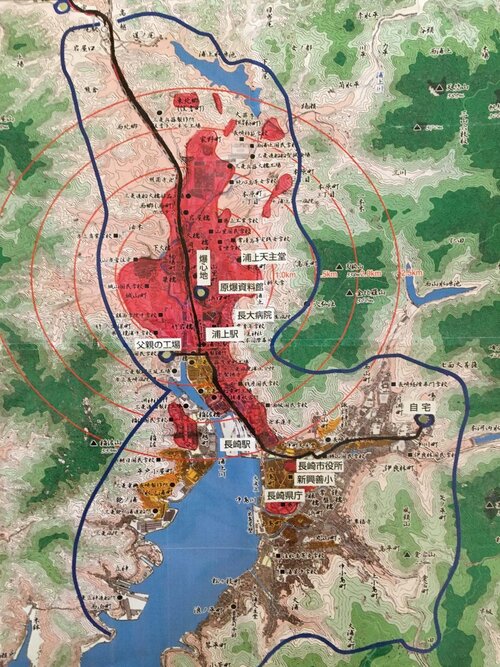 Map of Nagasaki after 1945 atomic bombing

Initially controlled by the nuclear industry and its government enablers, the scientific community has slowly developed an independent consensus acknowledging that internal exposure from radioactively hot particles causes excessive cellular damage and a significantly increased risk of cancer. Now Japan’s legal and judicial High Court in Hiroshima has reached the same conclusion. Working with our colleague Dr. Marco Kaltofen from WPI,  Fairewinds is proud to have been at the forefront of citizen-science to recognize the migration of radioactive micro-particles since Arnie first spoke about the detection of Fukushima hot particles falling in and around Seattle more than 10-years ago.

Thanks to the fieldwork and assistance from community-volunteer citizen-scientists, scientific work with our colleague Dr. Kaltofen, and financial support from Fairewinds friends and supporting foundations, we have published two highly regarded peer-reviewed papers detailing the spread of Fukushima radioactive micro-particles throughout Japan and especially at Tokyo Olympic venues. Currently, we have two more research papers in review concerning the spread of radioactive microparticles here in the U.S. and the U.K.

Cutting-edge science like this is not easy. However, this latest court ruling proves that our findings impact communities worldwide, and the data shows why radioactive materials must be contained forever and that currently, actual cleanup of leaking radioactivity is not possible. 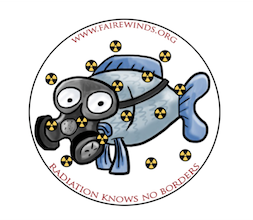 Windborne hot particles don’t stop when they reach arbitrary political lines drawn on maps. Instead, migrating radioactivity continues its travels. Whether from a leaking uranium mine, the corporate property line at nuclear power sites or radioactive waste dumps, or at another country’s borders when a nuke containment system blows up as we saw at the Fukushima Dai-ichi meltdowns, Radiation Knows No Borders!

What is in the air you breathe, the water you drink, and the food you eat? Unfortunately, you cannot see, taste, or smell the radioactive micro-particles as these highly contaminated atomic micro-particles move around the globe.

Thank you for supporting Fairewinds Energy Education as we demonstrate that Radiation Knows No Borders. Every dollar counts. Please help us continue this vital work with a donation today. Two more active research projects monitor the spread of radioactive microparticles here in the U.S., and in the U.K. Seven more communities have asked for our support. Currently, we have no funds to launch any more community-volunteer citizen-science projects to help those communities prove that they need cleanup and protection. Analyzing samples, creating the databases, and reaching out to protect communities requires your support. Thank you.

After a while, rain started falling.
Black, black rain. Huge drops.
People craned their faces upward and opened their mouths wide to catch the drops.
Hot bodies, so very hot, like balls of fire. They wanted water.
[ Artist’s comments ]

As a non-profit 501©3, our work is supported by grants and by many small individual donations from people like you from all around the world.

The Fairewinds Crew works hard to demystify nuclear power through education. Supporters like you power our work forward!