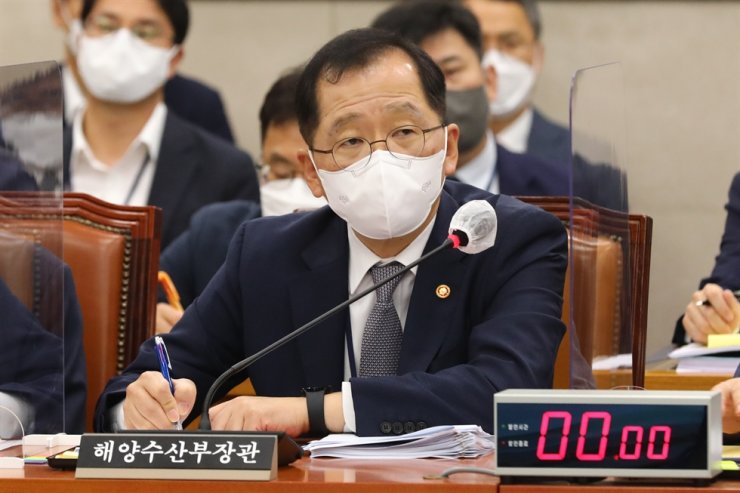 Oceans Minister Cho Seung-hwan / Yonhap
Korea is considering whether to petition an international court over Japan’s decision to discharge radioactive water from its crippled Fukushima nuclear power plant into the sea, the oceans minister said Monday.

Last month, Japan’s nuclear regulator, the Nuclear Regulation Authority, formally approved the plan to discharge the radioactive waste water stored in tanks at the Fukushima Daiichi Nuclear Power Plant into the Pacific Ocean. More than 1.2 million tons of tritium-laced water is expected to be released.

During a parliamentary committee session Monday, Oceans Minister Cho Seung-hwan said that the government-wide task force on the Fukushima plan has reviewed “multiple times” whether to take the issue to the International Tribunal for the Law of the Sea (ITLOS).

Korea has urged Japan to have in-depth discussions with neighboring countries before pushing ahead with the plan, and has been working to garner international support for alternatives.

“The government, primarily, is making constant efforts to prevent Japan from releasing the contaminated water,” Cho said. “The government has raised the issue during multilateral meetings, stressing scientific and objective analysis verifications.”

Some lawmakers and civic groups have criticized the Seoul government for not doing enough to prevent the plan.

“We do not accept the release plan. Our stance is that we also need to think of responses (to its actual release),” Cho added.

In August 2021, the Seoul government submitted a document to the London Protocol secretariat that suggests the formation of a task force in charge of the Fukushima issue, though Japan has insisted that the matter is not subject to discussions under the Protocol.

The London Protocol calls for banning dumping, with some exceptions. It has 53 signatories, including Korea which joined it in 2009. (Yonhap)