Join us for a mass protest in London against government plans to spend £100 billion replacing the Trident nuclear weapons system! Wrap Up Trident 1pm – Saturday 24 January 2015 Westminster, London (Nearest tube: Westminster!) After the 2015 general election, a final decision will be made on replacing the Trident nuclear weapons system. We have to send a clear message to MPs: Trident must be scrapped, not replaced. That’s why we are having an eye-catching mass action – linking government and parliament buildings in a long peace scarf knitted by thousands of people. The government wants to sign contracts to make us nuclear armed for another 40 years. We have to stop this madness. Instead of wasting £100bn on nuclear weapons, thousands more jobs could be created in the NHS, sustainable energy and environmental protection. Let’s meet people’s real needs. Make sustainable jobs, not WMD! Nuclear weapons are designed to cause unprecedented humanitarian catastrophe. It’s past time for the UK government to join other UN nations to negotiate a nuclear ban treaty. For more information, contact: E: [email protected] T: 020 7700 2393 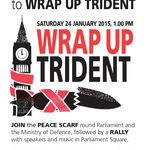