The convoy heading north on the M6 (Nukewatch UK/PA)

Anti-nuclear campaigners have criticised the decision to transport nuclear warheads from the south of England to Scotland during the pandemic.

A convoy carrying the weapons is understood to have left the Atomic Weapons Establishment site at Burghfield, Berkshire, on Wednesday morning and arrived at the storage facility at the Royal Naval Armaments Depot Coulport in Argyll and Bute that evening.

Nukewatch UK claims the convoy would have involved at least 50 personnel, including a crew change, and said it travelled along the M6 and on the M8 through Glasgow city centre.

The convoy that transports Trident nuclear warheads left AWE Burghfield near Reading this morning. If you spot it call us 0345 4588 365 #COVID-19 http://nukewatch.org.uk 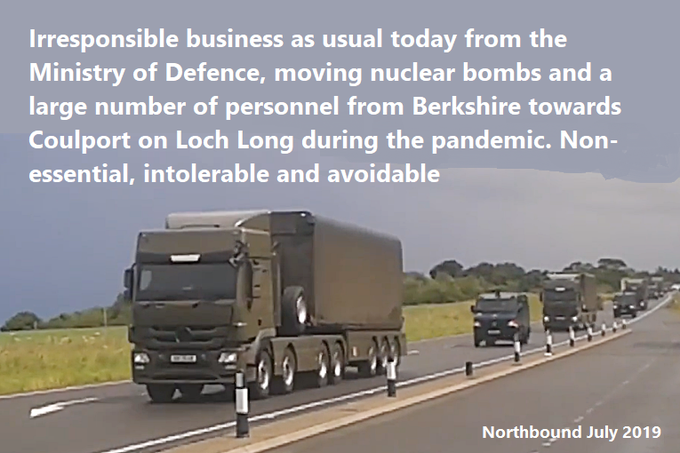 37 people are talking about this

Jane Tallents of Nukewatch UK said: “We never think this is essential travel and certainly at the moment there is no justification for putting us at further risk of potentially overwhelming the NHS if there was an accident.”

She also voiced fears over the movement of workers who could potentially be carrying coronavirus.

She added: “It is never right to possess and deploy nuclear weapons and transport them on public roads. Doing it right now is completely irresponsible.”

Scottish Campaign for Nuclear Disarmament chairwoman Lynn Jamieson said the “transport of nuclear bombs across the English-Scottish border is always an unnecessary journey”.

She added: “The purpose, ensuring British capacity to threaten mass destruction, diverts efforts away from genuine world security while risking a catastrophic accident.”

A Ministry of Defence spokeswoman said: “This move is part of an essential military operation and has been carefully planned.

“Government health advice is being followed at all times and the movement of staff in public areas will be kept to a minimum.”

A Scottish Government spokesman said: “The Scottish Government is strongly opposed to the siting of nuclear weapons in Scotland – in terms of the transportation of such weapons, we have made clear to the UK Government that we expect the Ministry of Defence to do so as safely and securely as possible at all times.”

Nigel Day of Oxford CND and Nukewatch sent us this:

Pictured below – Nuclear warhead carrier (1 of 3) in northbound convoy, A34, Oxford, travelling from Atomic Weapons Establishment Burghfield, near Reading, to Royal Naval Armaments Depot, Coulport, next to the Faslane nuclear submarine base, Scotland on Wednesday 13th May 2020.

The convoy was tracked and monitored throughout its journey.

People in England are being told not to travel to Scotland under new coronavirus guidance.

The devolved administrations of Scotland, Wales and Northern Ireland. All are sticking to the “stay at home” message. They state that people from England should not be making trips to other parts of the UK.

This convoy defied that requirement, as well as being the most dangerous cargo on our roads.

Convoy near Oxford- Click on thumbnail to enlarge it 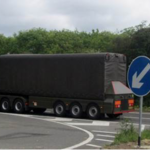