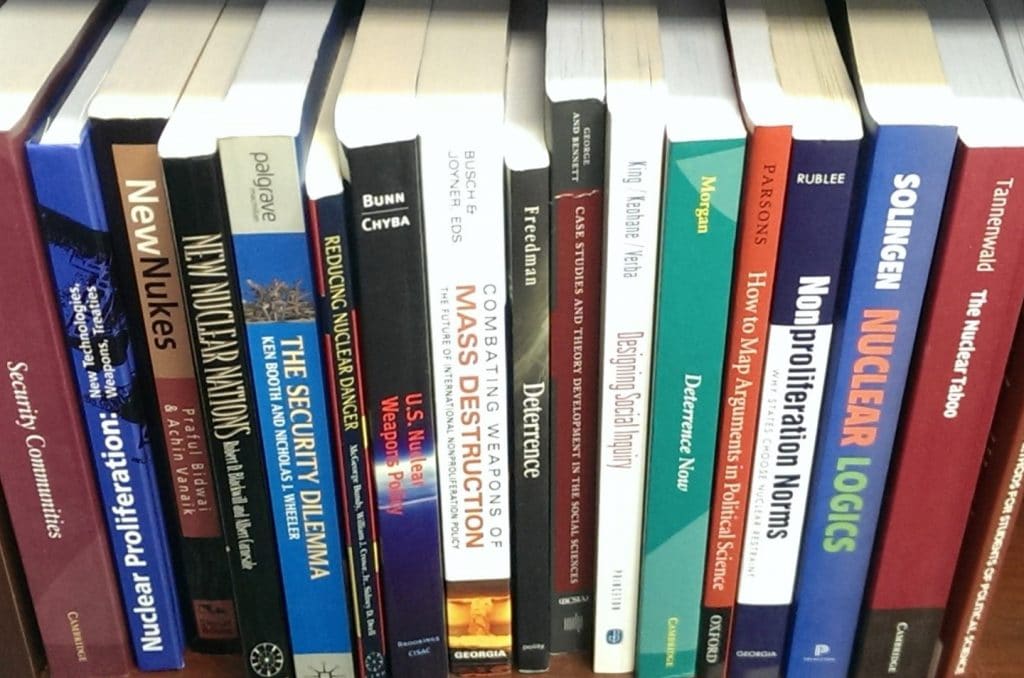 This week, students across the United States are heading back to school. While many high schools and universities are still deciding whether classes this semester will happen online, in-person, or in some hybrid combination, one thing is certain: Nuclear weapons are not a standard part of their class curricula.

A perpetual question of self-reflection in the nuclear professional community is why so few people are aware of the dangers associated with nuclear weapons, especially in the United States, a country that boasts 43 percent of the total global nuclear stockpile.

But the answer is fairly simple. Nuclear weapons issues are not a standard part of secondary school education, nor are they widely covered in undergraduate and graduate programs. A 2018 survey of 1,100 high school students in Washington State found that less than 1 percent even knew which countries possessed nuclear weapons. The finding was all the more startling because the students live in a nuclear-armed country themselves, and in an area with a nuclear legacy dating back to the Manhattan Project.

While the situation is not as bad at the university level, the number of undergraduate courses that cover nuclear weapons issues is still low. A 2019 study on undergraduate nonproliferation education found that, among 75 of the top-ranked public, private, and military institutions in the country, on average, each institution offered seven such courses over a two-year academic period, or less than two courses per semester. A good way to contextualize that is to compare it to course offerings on climate change—the other most pressing threat to humanity’s survival. The same study found that on that topic, the nation’s three leading public, private, and liberal arts institutions each offered between 19 and 30 courses during just a single academic year (2017–2018).

Why does this matter? It matters because the nuclear weapons threat isn’t going away—if anything, it is growing—but the number of people working in the field is shrinking. N Square, a funders collaborative focused on bringing new and innovative ideas, approaches, and perspectives to nuclear threat reduction, published a report in 2019 titled, “Greater Than: Nuclear Threat Professionals Reimagine Their Field.” That report offered candid, first-hand insights into critical internal challenges facing professionals working in the field. These include serious workplace issues affecting the resilience and mental health of nuclear threat professionals, systemic barriers to innovation and collaboration, and the absence of basic structural supports that other fields take for granted. The study concluded that the very real inner challenges facing the field are not going away, nor are they likely to do so unless organizations and their leaders confront them head-on. Young people are already leaving the field because of these issues, and the signals are strong that the workforce is not able to replace itself.

Sarah Bidgood, the author of the 2019 study on undergraduate nonproliferation education, wrote that:

By 2023, nearly 40 percent of the National Nuclear Security Administration’s employees will be eligible for retirement. Within the next decade, 80 percent of the State Department leadership could be drawing a pension. Meanwhile, the number of Americans who took the foreign service exam in June 2017 was down 26 percent from the previous year and fell 22 percent from October 2017 to October 2018. If a new generation of experts cannot be recruited to replace those who are stepping down, the branches of government responsible for nonproliferation and disarmament will be unable to do their work.

The field is going to need many more bright minds to solve current and future nuclear challenges. Attracting those bright minds starts with building awareness of the issue. And awareness of any issue can be linked to issue exposure. So, if school boards, curriculum writers, and teachers and professors continue to ignore the topic of nuclear weapons and do not include it in class curricula, the public will continue to be unaware of the existential threat these devastating weapons pose to humanity, and the professional field will have difficulty sustaining itself. Nuclear weapons policy is confusing, highly technical, intimidating, shrouded in secrecy, and largely dominated by an awfully small group of men. So those who want to begin exploring the subject may find it exclusive, inaccessible, and hierarchical. But the simple and easy-to-understand fact remains that nuclear war remains a significant global threat.

RELATED:
Lo-fi beats to save the world to

So, what can be done? Systematic changes to curricula across the country will take time and effort to achieve, but individual action can go a long way, and there’s no reason to wait. Here are three relatively easy and practical solutions that teachers and professors can implement this school year—without having to go through too many bureaucratic hurdles.

First, check out a new platform that offers a diverse volunteer network of professionals ready to speak with students and teachers about topics, lessons, classes, college, internships, and career advice on nuclear issues. The platform is called NRICHED, and its creators want to empower students with agency to tackle the world’s biggest problems through experiential learning. Beyond the network of professionals, the platform also offers engaging, memorable lesson plans to help enhance understanding of nuclear weapons issues.

Second, consider offering a nuclear security undergraduate class at your institution, and press administrators to recognize its importance. For those whose administrators are hesitant, the Stanton Foundation provides grant support for the development of new nuclear-related courses for undergraduates each academic year. (Full disclosure: I was the lucky recipient of such a grant, which allowed me to teach a course on nuclear security policy, the first of its kind to be offered at the undergraduate level, at the University of Maryland this past spring.)

Third, enlist the outstanding work of Girl Security, an organization that provides specialized programming for (female) high school students on national security subjects, including nuclear weapons. The Girl Security team helps empower young women with practical training through simulation exercises developed by women national security practitioners. Moreover, they provide girls with placement in a phased mentorship network, pairing them with women national security professionals who are one step ahead of them in their academic and professional advancement.

On a cold winter’s afternoon last Christmas, my 10-year old nephew innocently asked, “But, why would countries even want a nuclear weapon?” It’s a great question, especially because it came from a young boy. I can’t help but wonder, though: Would he have been so curious had I—his favorite aunt—not been working in the field? More important, will his education give him the tools to answer the question?

This article appeared in the Bulletin of the Atomic Scientists