IT IS THEREFORE NO COINCIDENCE THAT THESE NEW REGULATIONS HAVE BEEN INTRODUCED. 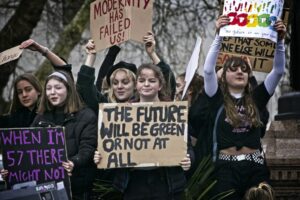 Students at the Global Climate Strike in London on Friday 15th March 2019.

Last week, the Department for Education released their new relationships, sex and health education guidance. Within this, the DfE says that schools should not use material produced by organisations who take ‘extreme political stances’, which include a ‘publicly stated desire to abolish or overthrow…capitalism’.

As Jessica Simor QC pointed out, the guidance also states that examples of extreme political activity include ‘the encouragement or endorsement of illegal activity’. Given the fact that the government unashamedly breaks the law by selling arms to Saudi Arabia after it was ruled unlawful last year, surely schools shouldn’t accept resources produced by the government!

The ridiculousness of this guidance hardly needs pointing out. Given the existence of the internet, it will be impossible for the government to prevent students from accessing anti-capitalist materials. As Tariq Ali pointed out: “How could both young and old people not read anti-capitalist analysis after 2008, or now with the virus going on and recessions looming all over the western world?”

Furthermore, students hardly need to look any further than the state of their own schools to become anti-capitalist; schools are underfunded, understaffed and in some cases cannot afford to provide textbooks and lined paper.

Regardless of its impracticalities, this is yet another worrying attempt by the government to restrict civil liberties and political dissent, which will undoubtedly have an impact on the anti-war movement.

Students have long been at the heart of anti-imperialist campaigning, and since the protests against the Iraq War in 2003, student involvement in anti-war campaigning has continued consistently. This summer has seen March for Yemen protests organised across the UK and these have seen hundreds, sometimes thousands, of mostly students take to the streets to protest against British arms sales to Saudi Arabia, which are being used in Yemen.

These new regulations will make it increasingly difficult for students, particularly at schools and colleges, to raise awareness about the situation in Palestine, British arms sales to Yemen and potential wars with Iran and China amongst other students at schools colleges and universities.

In 2016, a schoolboy was interrogated in his home after wearing Free Palestine badges to school and raising money for children in the Occupied Palestinian Territories. University students have also been targeted and stopped from organising meetings on anti-war issues, particularly in relation to Palestine.

The updated Prevent guidance released in 2019 listed several protest groups, including Stop the War Coalition, CND, Extinction Rebellion and Palestine Solidarity Campaign, as extreme groups. This is undoubtedly designed to stop students getting involved in these groups, since the government is fully aware that the climate crisis, imperialism and the situation in Palestine are major concerns for young people. The Friday strikes for climate, where students have walked out of school to demonstrate against the government’s inaction on the climate crisis, exemplify this.

The government is also clearly aware and concerned about the impact students can have on the political landscape. The strikes for climate have shifted the debate on the climate crisis and the need for a Green New Deal, while the Black Lives Matter protests this year, which were attended by mainly young people, caused shockwaves throughout the US and UK, bringing racism to the forefront of political discussion. The protests against the deeply unfair and classist algorithm used to determine A-level results forced the government into a U-turn.

It is therefore no coincidence that these new regulations have been introduced. Students must continue to organise and demonstrate against the system and the multiple crises it has created. Within the anti-war movement, everyone, particularly students, must not the let the government’s continued attack on our civil liberties stop us from opposing Western imperialism and campaigning against war.